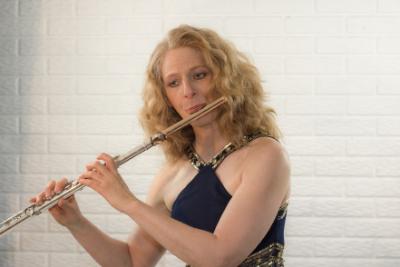 Leslie Marrs is Associate Professor of Flute at Drake University. Dr. Marrs has performed as a chamber musician from the nation's capital to New Delhi and Beijing, and has been featured as Soloist with the Bay View Festival Orchestra, University of North Carolina at Greensboro Orchestra, and the United States Army Field Band, and has been invited to perform at numerous National Flute Association conventions, including as competitions winners and as a professional.  Her dissertation Integrating Extended Techniques into Flute Pedagogy: A Resource Guide for Flutists, Teachers, and Composers won the 2005 NFA Dissertation Competition.  Her article, “Rich Tone Production with Centered Pitch à la Whistle Tones” is published in The Woodwind Player's Cookbook: Creative Recipes for a Successful Performance. Dr. Marrs has taught in residence at Minzu University in Beijing and for the Holy Trinity Music School in Haïti; she earned her 200 Yoga Registry Training certification in 2019 from the Yandara Yoga Institute.

She performs in Dúo Pelliroja with Nancy Schneeloch-Bingham and has a critically acclaimed CD with guitar duo partner Robert Trent. She can be heard on James Brody’s Background Count and on Robert Fruehwald: Music for Flutes and Guitar. The Flute Network says of the Fruehwald CD, “Flutist Marrs plays the flute, piccolo and alto flute with a sureness and ease belies the difficulties inherent in these pieces—and she brings them off with a great deal of flair and excitement. Her handling of high, delicate harmonics is extremely smooth and deft as are her treatment of key clicks, double stops, and tone bending glissandos that sound like a ‘fretless flute.’ ”

Dr. Marrs’s interest in contemporary music has led to performances of new music at the College Music Society annual conferences as a member of the CMS players. As a former board member and vice-president of the Baltimore Composers Forum, she premiered several works for composers in the Baltimore-Washington, D.C. area. She has also hosted her own radio show, Music from Marrs, for WHFC in Harford County, Maryland.  Dr. Marrs earned her D.M.A. at the University of North Carolina at Greensboro, her M. M. from Florida State University and B. M. from Virginia Commonwealth University. Flute teachers include Mark Sparks, Charles DeLaney, Deborah Egekvist, Francile Bilyeu, and Tim Day.