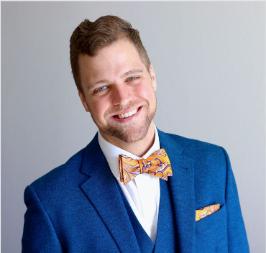 Baritone Isaiah Feken, a former Patricia and Dr. Carl S Hoveland Opera Fellow, has appeared in leading roles across the U.S. and abroad. Performance credits include First Sargent and Figaro in Il barbiere di Siviglia with Opera Colorado, the count in Le nozze di Figaro with the Voci nel Montfeltro Festival, Ford in Verdi's Falstaff with Crested Butte Music Festival, the Sorcerer in Dido and Aeneas with Athens Choral Society, and Fred Graham in Kiss me Kate as well as Harry Stritch in the world premiere of A New Kind of Fallout with Pittsburgh Festival Opera. Before coming to Drake Dr. Feken was an Artist in Residence with Opera Colorado for their '19-20 and '20-21 seasons, and was the recipient of the Harold Norblom Award in 2021. Other awards include the Denver Lyric Opera Guild's Mary Wise Memorial Award, Hyechka Club of Tulsa's Laven Sowell Collegiate Vocal Scholarship, and a Presser Foundation Scholarship.

An avid supporter of choral and chamber works, Dr. Feken has appeared as a soloist in staple works, such as Handel's Messiah, Bach's Magnificat, Rachmaninoff's The Bells, and Finzi's In terra pax, as well as new works including John Trotta's Seven Last Words, and Howard Goodall's Eternal Light. Dr. Feken is especially passionate about obscure and rarely performed works, including performances in Athens Choral Society's productions of Kurt Weil's Down in the Valley and The Firebrand of Florence.

Dr. Feken is an active researcher and clinician. His recent article "The Voice Divided: A Data-Driven Analysis of Vocal Subcategorization," has been accepted for publication by the Journal of Singing, with an expected publication date of Fall 2021. As a clinician/ lecturer Dr. Feken has partnered with organizations around the US, including Brenau University, the Osher LifeLong Learning Institute, the University of Tulsa Vocal/Choral Camp, the Tulsa Symphony Summer Strings Camp, the Stafford Opera Troupe, and Bixby Public Schools.

A native of Tulsa, Oklahoma, Dr. Feken received his bachelors from the University of Tulsa, later completing his masters and doctorate at the University of Georgia where he served as principle baritone for UGA Opera Theatre. Credits with UGA include Malatesta in Don Pasquale, the count in Le nozze di Figaro, Guglielmo in Cosi fan tutte, Peter in Hansel & Gretel, and the title roles in Gianni Schicchi, Don Giovanni, and The Impresario. During his time at UGA Dr. Feken also performed the titular character in the UGA Theatre Department's production of Sweeney Todd.