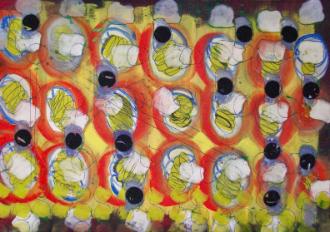 Associate Professor Angela Battle has an interdisciplinary education. She received her B.F.A. in Painting from Virginia Commonwealth University in 1980 and returned to complete a B.S. in Biology in 1996. She continued her education at the University of New Mexico to complete an M.F.A. in Painting in 1999. She teaches at Drake as the major professor in painting. She also teaches several interdisciplinary courses that reflect her scholarly interests in the intersections between art, self and the natural world. She has exhibited nationwide from San Francisco, California to Richmond, Virginia.

Of her artwork she writes: These days I make ledgers built of
pages of imagery in gouache and ball point pen on paper that
layer together and are usually intended to be encountered as a
loose book that may be leafed through. Each ledger is titled to
give hint to what may drive the ranging imagery within. All of my
work is a long contemplation of wild life all around - an accounting
of appearances and vanishings, ephemerally or permanently, all
of it questioning personal experiences ‘out there’ that are filled
with measures of both transcendence and sadness; all of it as
‘witness’. The work offered here is from my third: Opossum Ledger
Fine Arts Calendar