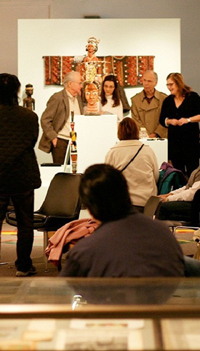 Lenore Metrick-Chen received a joint Ph.D. at the University of Chicago from the Committee on Social Thought and from the Department of Art History.

Her work examines contemporary visual art aesthetically and as a language of cultural communication and memory: the art and politics of visual art. Much of her research concentrates on transnational relations between art and people, focusing on the United States and China. Her writings articulate the constant intertwining of the near and the (once) far, as in her recent book Collecting Objects/Excluding People: Chinese Subjects and the American Visual Culture 1870-1900 (2012 SUNY Press) which explores the reception and effects of United States Chinese Exclusion policies on 19th century American visual culture.

Professor Metrick-Chen participates in scholarly, activist and artistic communities through conferences and international programs. In 2011 she spoke at Harvard’s Visualizing Asia in the Modern World Conference on “Advertisement as Transcultural Negotiation: China in the 19th Century American Trade Card.” That same year, she attended a month-long program at the Confucian Summer Institute, sponsored by the Center for East-West Relations at Beijing Foreign Studies University. In 2012 she participated in the National Endowment for the Humanities three-week program: Re-envisioning American Art History: Asian American Art, Research, and Teaching and later that year she presented “The Need for Cross-Cultural Memory,” a paper on ruins in contemporary art in China and the West, at a colloquium sponsored by the Danish Memory Network in Copenhagen. Feminism is an important context in her writing and her teaching.

Teaching is a source of reflection, sharing and testing ideas, and furthering knowledge. Metrick-Chen designs her courses to engage with students in dialogues and practicums. Her recognition that students benefit greatly by engaging ‘hands-on’ prompted her creation of courses in which students co-curate exhibitions that explore cultural intersections. Recent curatorial projects involved students in exploring transcultural exchanges in Imaging Others in the Colonial Period and Ape Rope Pray Eight! (appropriate!), and in Projecting Identity. Students focused on issues of personal and cultural identity and of authenticity and copy.

Her interest in speaking with global and local artists inspired her radio program, Artists on Art with Lenore Metrick-Chen, on KFMG 99.1 FM, also available on her blog.