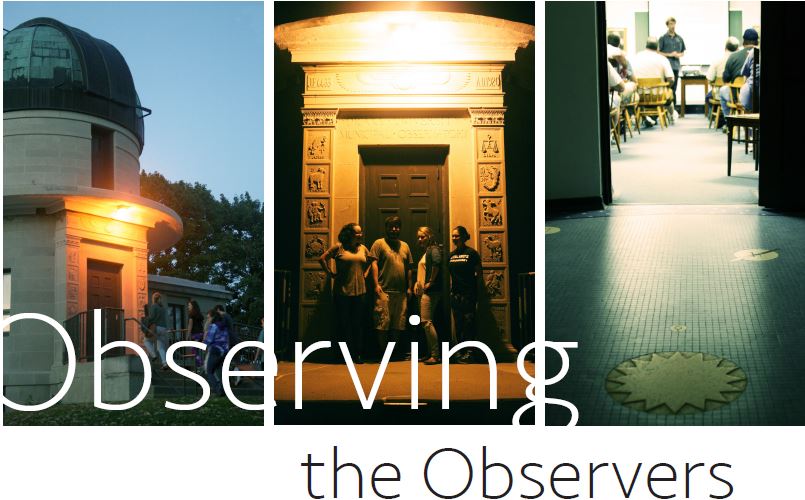 These are the voyages
of the Drake Observatory
crew members...

“I want to let you know that you matter. Until you multiply yourself by the speed of light squared. Then you energy.”

The chuckles of seven physics students erupt and resonate through the darkness as Annie Furman, sophomore astronomy major at Drake University, recites this joke to me. In another setting, we may have rendered ourselves a nuisance, but we’re in the middle of a golf course at nine o’clock on a clear Friday night. We’re at the Drake Municipal Observatory, and the skies are perfect for observation.

Furman’s nerdy humor doesn’t stop there. In fact, if Furman were likened to a character on Star Trek, her observatory coworkers said she’d be Hikaru Sulu, the comic relief of the starship Enterprise.

She cracks me a new one.

Furman is, of course. referring to the observatory dome, whose silhouette I can distinguish from a dark blue horizon left slightly burnt by the sunset. The dome holds a massive, 8.5 inch refracting telescope built in 1894, and just below it is a lecture hall filled to the brim with community members. They’re listening to Dr. Charles Nelson, professor of astronomy at Drake and observatory director, as he spearheads a discussion on the accomplishments of the late Cassini-Huygen’s mission to the Saturnian system.

These lectures, hosted by Drake’s department of physics and astronomy and typically headed by lecturer Herb Schwartz, occur every Friday night at 8:00 pm from late spring to October. On clear nights, the lectures are suceeded by sky viewing through two powerful and easily maneuvred telescopes.

But this story isn’t about the observatory, nor is it about the unique perspective of the universe this tiny corner of Des Moines provides. This is the story of four crew members, piloting their localized adaptation of the starship Enterprise, boldly going where no student has gone before.

For now, they’re waiting for a Friday night lecture to conclude. When it does, this entourage of impassioned astronomers will throw on their game faces instead of cracking nerdy jokes around a journalist’s tape recorder. They’ll engage the public; answering questions about the telescopes, the observatory, planets and nebulae. They’ve got customers, and a sky full of discovery to sell.

Dusk has just befallen the golf course when Katrina Sletten, senior physics, astronomy and public relations major at Drake, begins to point out and label celestial bodies as they appear in the sky. Her knowledge base of the ethereal is certainly justified given her choice career path; a communications director or community-outreach official for a scientific organization or planetarium.

On this particular Friday night, the white freckle Sletten identifies as Saturn lies about 45 degrees above the southern horizon. Sletten positions the telescope accordingly.

“The telescope is relatively new compared to the observatory, I guess you could say,” Sletten said. “It is a Cassegrain telescope…we’ve had it probably since last spring. What’s cool about it is it’s motorized. So you can type in a star name or a galaxy name, or a Messier object, and it will go to it once you align it.”

I peek into the viewfinder; Saturn’s form was pristine, a contoured white nugget planed in a black sky. It looked like a negative silhouette of an old man tipping his bowler hat. And just to the left of the brim, which represents the rings, I could see a white speck; Titan, Saturn’s largest moon.

Sletten knows the ins and outs of the observatory procedures; of the four colleagues, she’s been working at the observatory the longest. Yet even her working knowledge, Sletten said, is ousted by that of Jessica Schertz, a senior astronomy and math major at Drake University.

“She’s Spock, because she always knows what to do,” Sletten said. “If I don’t know what to do, I’ll be like, ‘hey Jess, how do you do this?’ and she just knows how to do it. In the show Star Trek, Kirk is kind of the outspoken leader, but Spock is the leader that most people listen to the most, I would argue. He’s the logical one who knows, in every situation he knows what to do.”

Indeed, Schertz speaks softly during our interactions, yet she is no less a leader in the group dynamic. She operates the telescope that captures the Andromeda galaxy in the viewfinder, a faint smudge of a spectacle compared to Saturn.
Schertz demonstrates an array of knowledge on Andromeda as community members inquire throughout the evening, but her favorite celestial body is the Ring Nebula.

“Looking through the telescope, it’s just going to be white, a kind of cloudy look to it,” Schertz said. “But if you do a long exposure picture with it, it does have some color….That was the first deep space object I found outside of the solar system, so kind of proud of that one.”

Upon arrival at Drake, Schertz had yet to discover an enthusiasm for astronomy as a career. Initially a math single major, she worked as an astronomy lab assistant before signing up at the observatory. Schertz developed her skills as an astronomer alongside friendships with her colleagues.

One such friendship that Schertz developed was with Nick Gautille, a junior astronomy major who credits Schertz and Furman for his affiliation with the observatory.

“They kind of roped me into it, and I’ve been here since,” Gautille said.
Gautille’s favorite celestial body lies a bit closer to home; Jupiter, the planet that propagates the largest storm in our solar system. This storm, also known as the Great Red Spot, upstages any hurricane our Earth has ever hosted in its turbulent magnitude and age; the storm has afflicted Jupiter’s southern hemisphere for over 150 years as science historians have been able to verify.

The Great Red Spot intrigues Gautille, who said he wouldn’t mind conducting research investigating Jupiter as a career.
Gautille said that in his years as a student, Drake augmented his mathematic and problem solving ability, enough to make his choice career path a reality.

In terms of the group dynamic, Gautille is both the source and receptor of playful banter amongst the colleagues.

“[The members of the group] are siblings, I guess is the best way to describe us,” Sletten said. “The reason I say that is we all work together, but when we’re out here, while we get stuff done, we also like to have a lot of fun.”

Throughout the evening the group members engage in all types of shenanigans, jousting with puns and witty comments, rapping in unison to Fort Minor’s “Remember the Name. “Sletten jests that Gautille has “the aesthetic of a brown bear,” an allusion to his beard.

“The four of us, Nick, Rena, Jess and I, we are all super close to each other,” Furman said. “They are very motivational to me, because I’ve had heart-to-hearts with them about struggling in physics, and struggling with astronomy. I’ve had many many heart-to-hearts with them about how everyone struggles in physics. It’s a hard major. It’s a hard thing to do. They believe that I can get through it.”

Furman and I are having this conversation inside the observatory dome, dimly lit with red light and contoured by black, geometric lines that structure the establishment. We are dwarfed by the pedestaled telescope, which Furman says is 121 years old and a staple of the education Dr. David Morehouse received as a student at Drake before becoming president of the university and founder of the observatory.

“I’ve said many times to my parents and friends and family that I could live in an observatory,” Furman said. “I’m studying astronomy for the sole purpose of being an observational astronomer and being able to stay in an observatory forever. It’s very quiet. It’s intense, at the same time.”

Another occupational prospect Furman has in mind is lunar astronomer. Her electronic devices are infested with photos of the moon collected from various telescopes she’s encountered. Furman mentions Albireo, the two star system, as one of her favorite celestial objects. Also known as Beta Cygni, Albireo is visually comprised of one bright orange blob and one cyan blue dot located approximately 130 parsecs (430 light-years) from the sun, according to earthsky.org.

The ardor Furman harbors for astronomy emerges in her interactions with the public. One of the lecture attendees, a child, took to following the observatory employee around throughout the evening, asking about the telescopes and the stellar objects within their scope. Furman answered with unyielding enthusiasm and erudition.

“When I’m here [at the observatory], it’s relaxing, but its also productive,” Furman said. “It’s me pursuing what I know I want to do for the rest of my life, yet enjoying myself and finding inner piece. That can be very hectic and hard to find.”

The Drake Observatory
The Enterprise

All crews pilot a vessel. Yet the metaphorical starship Enterprise of Drake University finds itself in need of structural development, but want of funding.

“I’d say the sad thing is that the longer I’m here, the more that I notice how much money and love needs to be put into the building and the program itself, because we have an amazing thing here, and the university…they just don’t treat it the way it should be loved,” Sletten said.

Observatory lecturer Herb Schwartz said via e-mail that on a clear Friday evening “we will have more than 100 visitors come to the observatory.” Even on a rainy night earlier this October, the lecture brought in about 70 community members. With such a public outreach in such an old building, the observatory inevitably undergoes infrastructural erosion.

“The newest renovations made to the Observatory have been painting of the Classroom, a new roof and securing the railings around the walkway around the dome,” Schwartz said.

According to Sletten, however, administrators at Drake University do not allow the observatory to take donations or engage in fundraising to compensate for infrastructural damage. Sletten said that marketing endeavors in this sect would prove immensely successful with the observatory’s current community base.

“You could easily have a wine and cheese under the stars, and people would come,” Sletten said. “People would come and donate money, but we’re not allowed to do that. We’re not allowed to use the building to fundraise for any reason…And that’s really frustrating to me, and to all of us, I think, because we love this place, we spend our time here. There is no place I’d rather be on a Friday night, honestly. And it’s so frustrating to me that a place that’s so loved by so many people in the community doesn't get the attention, and doesn’t get the updates that it needs.”

As Scotty in Star Trek: Next Generation said, a ship is only as good as the engineer who takes care of it.

“And from what I can see, the Enterprise is in good hands.”