The island of MISSFIT toys is actually more of a conference room, with a whiteboard blackened by all of the equations it carries. The room is busting at the seams, because it holds much more than unwanted polka-dotted elephants and airplanes that don't fly; in fact, it advertises an imaginative range of the physicist's favorite toy of all: the mind.

MISSFIT is the new research group on the Drake University campus, assembled and promoted by Dr. Athanasios Petridis, head of the department of physics. It stands for Magneto-Ionization Spacecraft Shield for Interplanetary Travel, which is precisely the contraption the researchers seek to design. Detailed below are its endeavors in the field of aerospace.

Why has NASA procrastinated the dispatch of manned missions to Mars until the 2030's?

There are several reasons, almost all of which account for necessary advancements in technology to give the expensive pursuit the most likely chance for success. MISSFIT is taking part in a piece of these advancements; the development of a shield to protect astronauts from the tragic effects of more than a year exposed to intense radiation.

"NASA and really anyone who is looking at traveling to Mars in the near future has the problem that humans don't really belong in space," said Katrina Sletten, a senior physics, astronomy, public relations major, and MISSFIT member.

Radiation is known for its detrimental biological effects, or more specifically cancer. From a physical standpoint, radiation is energy that travels in the form of waves or subatomic particles. When these high speed particles interact with living cells, they deposit the excess energy, sometimes directly slicing through organelles or causing disrepair to DNA strands. While the human body is evolved to withstand some bombardment, the damage is irreparable past a certain threshold.

Gratefully, the Earth's magnetic field deflects the large majority of interplanetary radiation, which saturate the upper levels of the atmosphere in two forms: solar and cosmic radiation. Solar energy is excess energy from the sun, mostly made up of a consistent river of protons. Depending on the sun's flaring activity, the radiation may swarm in heavy dosages pointed towards the manned spacecraft in question and threatening any human survival on board.

The second form are galactic cosmic rays, or GCRs. From whence they come, researchers do not precisely know, although it is hypothesized that they originate from distant star nebulae or galaxies.

Earth is surrounded by a giant magnetosphere, one that protects the moon, as well. It's the original force field, if you will. The radiative particles are de-ionized, or lose their energy, in the ionosphere, often emitting visual light that congregates at the poles to exhibit the phenomenon we call aurora borealis, the Northern Lights.

"But this is not the case when they go further away [from the moon]," said Petridis, supervisor of MISSFIT. "It's one of the biggest problems because it is estimated that people will die because of this radiation, or they will get very serious diseases before they even arrive on Mars."

Researchers for MISSFIT, as well as a few other international committees such as the European Space Agency (ESA), are committed to investigating this issue further.

"This is looking to be a multi-year research project," said Zachary Fisher, a junior physics, mathematics and computer science student. "Right now, we are in the initial data gathering stages, and seeing if things are even possible. But assuming that all goes well, we might end up creating a device that would be on a spaceship in 2030."

If students are enthusiastic about a particular topic, they will learn better, according to Petridis. Such was the mentality that inspired his the research opportunity for students.

"We want to have an inquiry based experience for our students that is integrated in the vertical dimension," said Petridis.

"In other words, it includes all possible years. Students can interact with each other, and the younger students can learn from the older students, if possible, and sometimes vice versa."

In the midst of the Fall 2016 semester, the Drake professor spent time gauging interest in the project, and attempting to recruit at least four enthused supporters.

Outside attendance of the meetings held every Friday afternoon, each member has been designated a particular task to investigate a specific component of radiation protection. There are even task forces, comprised of amalgamations of younger and older students, for more technically advanced topics in physics.

"Nobody has any idea how to do what we're doing," said Katie Huber, senior physics major. "But we are all doing it together, and figuring it out together as we go. It's still very early, but the implications of what we're doing are pretty significant and relevant to what's happening."

As secretary/historian for MISSFIT, Huber maintains an organized list of all assigned tasks and partitions, in addition to updating member progress reports and engaging in the tasks themselves.

"In the end, this involves ideas from many different parts of physics, including nuclear and particle physics, electromagnetism, atomic physics, and even chemistry," Petridis said. "So people can learn something from all those areas, and most of all they will learn how to research certain topics and come up with answers, including answers that will
require computations."

In this way, MISSFIT is not only involved in pioneering aerospace research, but the group is breaking traditional educational boundaries.

"It is interesting to learn how a collaboration works," Petridis said. "It's a different kind of learning compared to your standard course."

"It will be good to learn from nature itself," said Petridis. "Nature has solved the problem."

Passive protection is labeled as such because it does little else but insulate. Like a condensed form of the ionosphere, the passive protection would systematically entrap radiation before it reaches the inside of the spacecraft: a tangible shield.

At first glance, a good candidate would be to surround the spacecraft with lead; its protective qualities greatly outweigh many other elements.The problem is that lead is considerably heavy, and weight is always an issue during liftoff.

There are other candidates for passive shielding. Among those that MISSFIT is investigating are hydrogenated boron-nitrogen nanotubes, or HBNNTs, as well as Demron. The structures are lightweight, withstand very high temperatures, and are flexible enough to be interwoven in the fabric of spacesuits.

The second form of radiation shielding, and at the forefront of MISSFIT research, is active. This category extends to the active deflection of ionized particles with a condensed magnetic field and ionosphere similar to that of Earth's.

"Because we are looking at creating a pseudo-Earth type contraption, looking at magnets is a big part of it," Sletten said. "We need to see what would be better; using a permanent magnet, or electromagnets, seeing what shapes we can make with them, to mimic Earth's atmosphere that protects us from radiation ourselves."

Much of the task allotments are gathering data in eventual contribution to a design that will be tested computationally and through advanced simulations. The members are mostly concentrated, however, on developping an algorithm to determine the trajectory of a particle as it goes through a magnetic field.

"It is a really cool experience, getting to work on a project that may have a huge impact on the future of space travel," said Sletten. "Being able to say that you worked on a project that is now used to transfer people to Mars would be a cool outcome."

No matter the end result that the researchers achieve, one thing is absolutely certain. Anyone who finds themselves to be a Rudolph among reindeer is welcome to the island, or conference room, of MISSFIT toys.

"We are open to new students joining at any time, be they physics majors, be they chemistry majors, be they journalism majors," Fisher said. "As long as they are willing to put forth some effort into the research and help provide solutions to the problems that we're facing, or help us communicate with the people that can help us solve these problems. The more the merrier." 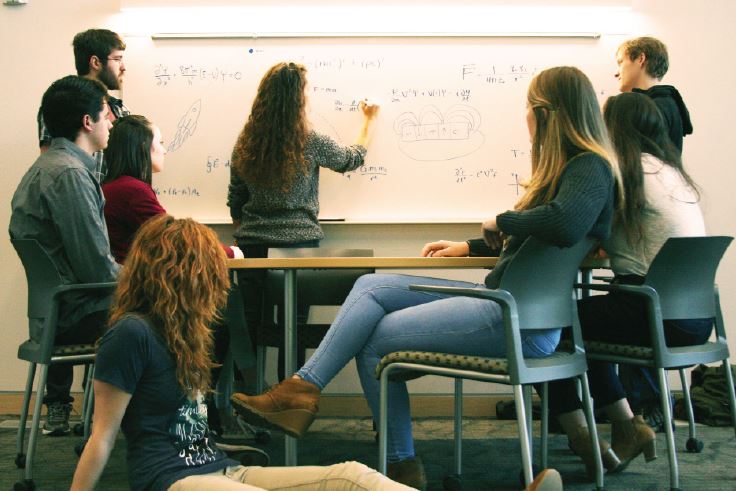