If you don’t think completing a physics major is hard enough, why not add two other majors into the mix? This feat may seem unfathomable or unattainable to some, but to others it is just their chosen college experience. Recently, the physics department has seen an uncommon amount of students pursuing a triple major.

Unlike some other schools, Drake University does not cap the amount of majors a student may pursue during their academic career. Some students have taken advantage of this system and are setting out to get the most education for their money. Zachary Fisher is a third-year student who is majoring in physics, math, and computer science. Due to the large amount of credits he entered Drake with, he felt “just physics wouldn’t be enough.”

A double major is common throughout the university, but adding that third major is where things get interesting, and Fisher isn’t the only one looking to complete a trifecta.

The reasoning for the commonality of those groupings lies within the fact that many of the classes overlap, so it is possible to have a course count for more than one major.

“Being an astronomy major, you automatically have to take all the physics classes for a B.A., and then you have to take half of the math classes which gives you a math minor if you take one extra class on top of that. Just having those classes overlap helps a lot,” said Jessica Schertz, a fourth-year student studying physics, astronomy, and math.

While getting a physics degree in and of itself is an impressive mark on the resume, students are always looking for a way to differentiate themselves from others, and completing three majors is one way to do that.

“If you are going to apply for a position at NASA, for example, and they see that you did physics and math and astronomy, they see you did all of that, instead of just studying astronomy,” Schertz said.

That may not seem enough reason to go through all the work, but the other benefits to triple majoring are clear to
those who chase it.

“The benefits are obvious, you can have careers in different directions and if the majors are related they sort of compliment each other,” Petridis said.

According to Fisher, it also provides lots of opportunities for the future since you have more to offer and can get a job right off the bat. However, the most echoed reason for pursuing three majors is the simple enjoyment of the academic areas and the opportunity to explore a broad range of interests.

Though there are things to gain from triple majoring, there are downsides to this ambitious path too.

“You generally have to put in a lot more effort,” Fisher said.“You learn how to flip that switch.”

To finish the three majors in four years, students often have to take seventeen to eighteen credits every semester to fit all the necessary classes in. According to Noah Smith who is currently a second-year studying physics, math and chemistry, the workload and can create a mess for scheduling.

The downsides may be a deterrent for some, but for Fisher, Schertz, and Smith, they love what they do and the value is clear to them. As Smith said, “You gotta be a certain kind of crazy, but I mean if you are willing to work for it and try it, it’s worth it,” Smith said.

The students who try for this trifecta have pride and appreciation for the physics department, and the department feels the same for them.

“I guess you could say we are more hard core, because if you take physics and you take all those classes, you can do almost anything because they are so tough here, “Schertz said.

“The students have broad interests and they are very focused on what they want to do, and they are also very capable, which is something that as a department we are very proud of, “Petridis said. 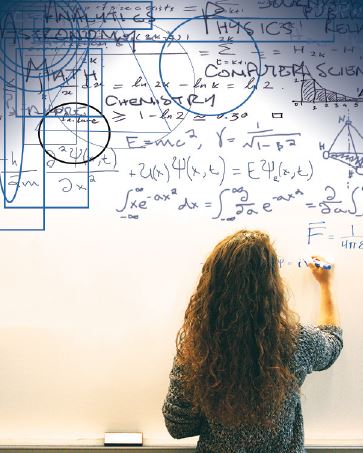