I traveled to Philadelphia to visit an exhibit on mound builder sites at the Penn Museum (University of Pennsylvania Museum of Archaeology and Anthropology). 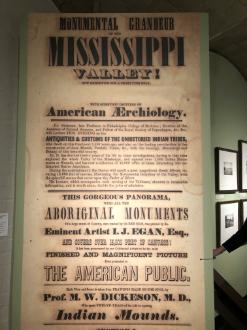 I am attaching an image from the exhibit. The exhibit featured a mix of recent photographs and 19th-century archaeological studies. What fascinates me most about this mix of “prehistoric” past, 19th century, and the present is how notions of science intersect with fantasies of identity and visual imagination—even though this mix can result in such lethal legacies as scientific racism. I am working on an essay for a collection of essays on fragments in early American culture (Incomplete Forms, tentatively to be published by University of Virginia Press) about visual representations of mounds and how the visual images try to make certain claims of completion or wholeness by adhering to standard tropes of aesthetic form. In the future, I want to see if I can visit the actual panorama of the Mississippi at the St Louis Museum.

I also spend half a day each in the Philadelphia Museum of Art, viewing early American art, especially landscapes, and the Philadelphia Academy of Fine Arts, which had an exhibit on Schuylkill Landscapes, comparing art about the Schuylkill to the more well known Hudson River School paintings. After viewing this exhibit, I did some walking in Fairmont Park along the river, including a visit to the house museum Lemon Hill. This urban park and its history relate to the Honors Class I teach on Transatlantic Landscapes in Art and Literature. 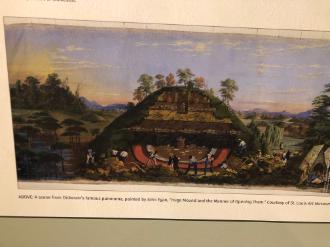 A draft of my essay has already been reviewed, and a second draft is due by August, 2020.