Eric Saylor (Department of Music), the 2018–21 Humanities Research Scholar, has used the funding from that award to support research on his forthcoming book Ralph Vaughan Williams, a new biography for Oxford University Press's Master Musicians Series.

Vaughan Williams (1872–1958) was among the most influential and widely-performed British art music composers of the twentieth century. He drew from a wide range of musical traditions—English folksong, Tudor sacred music, French impressionism, and Beethovenian symphonism, among others—to create an entirely individual idiom that helped raise both the profile and prestige of British music and composers. In addition to his compositional activities, he was an active conductor, teacher, administrator, author, and scholar whose career spanned some of the most turbulent and dynamic years in Britain's history. 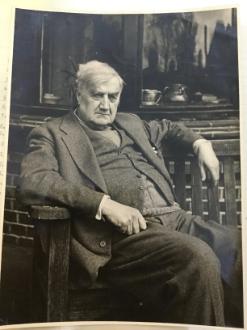 Saylor reports: "The funding provided by the Humanities Center allowed me to spend much of the Fall 2018 semester in London, working mostly at the British Library, but also with archives in Cambridge, Oxford, Stratford-upon-Avon, the Royal College of Music, Charterhouse School, and the Dorking Historical Centre (Surrey). Vaughan Williams has traditionally been viewed as a narrowly national figure, but a flowering of scholarship over the last two decades has called that portrayal into question. With that in mind, I have attempted to recenter Vaughan Williams's career and legacy from its traditionally Britain-centric context to one that positions his music as a significant expression of early twentieth-century modernity (if not High Modernism). Other major reconsiderations include exploring his own conception of what constituted "national music," his complex professional and personal relationships with and support of women in music, his political beliefs and activities, his major stylistic influences and practices, and his marriages to Adeline Fisher and Ursula Wood—the two women who supported him more than almost any other people in his life. The resulting portrait depicts a man of great imagination, deep sensitivity, and often surprising humanity, for whom music remained the single most important driving force throughout his life."