An interdisciplinary minor open to all Drake students from any academic major. By entering and graduating the LEAD program, students will be able to make significant contribution to their current and future communities by exemplifying ethical leadership through positive social change.

of core Drake LEAD faculty have an advanced degree in leadership

Student of the Month

Congratulations to Devin Cates for being chosen as the LEAD Student of the Month. Devin was nominated for his work in helping to plan Paul Morrison Service Week, which was part of the LEAD 100 class. During this project Devin showed exemplary leadership, teamwork and participation with his group. Devin’s favorite LEAD memory was the social in the Drake Park after the Paul Morrison Neighborhood Spruce-up! Outside of LEAD Devin is a member of the football team, as well as the community service captain on his team for the VA hospital. Congrats to Devin!

Read about past Leaders > 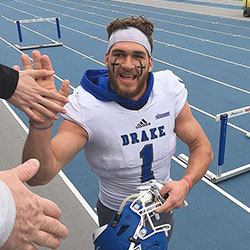