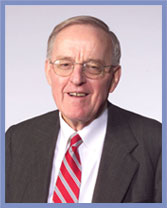 The Donald V. Adams Leadership Institute was created in 2000 and supported by Drake alumni passionate about continuing Dr. Adams' legacy of leadership for students far beyond his tenure at Drake. The Adams Leadership Academy was the Institute's first program, and has since grown to include three exclusive leadership training series for students, as well as and a number of campus workshops and events. Since it's inception, the institute was reached over 7,000 students.

Donald Adams served as Vice President for Student Life at Drake University from 1969 to 2007. In 1985 the title Vice President for Enrollment Management was added, and in January 1995, Dr. Adams assumed the position of Executive Assistant to the President. Dr. Adams served as Drake's 125th Anniversary Fellow from 2005-2007. On May 31, 2007, Dr. Adams retired from Drake University after 37 years of service. He is still highly involved with the Drake community and regularly attend DVALI events and programs.

The six personal values of Dr. Adams were the foundation of the Adams Leadership Institute: