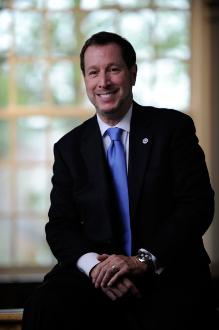 David Maxwell was president of Drake University from May of 1999 through June of 2015, and held a faculty appointment as Professor of Literature. Dr. Maxwell is considered a thought leader in academia and has been an active member of several national higher education associations.

Previously, Dr. Maxwell was director of the National Foreign Language Center in Washington, D.C., from 1993 to 1999, after serving as president of Whitman College from 1989 to 1993. Dr. Maxwell was at Tufts University from 1971 to 1989 as a faculty member in Russian language and literature, and served as dean of undergraduate studies from 1981–89. He holds a B.A. in Russian Areas Studies from Grinnell College, and an M.A. and Ph.D. in Slavic Languages and Literatures from Brown University. Dr. Maxwell was a Fulbright Fellow in Moscow in 1970–71.

Dr. Maxwell is married to Madeleine Mali Maxwell, a creative director. They have two sons: Justin, a user experience guru in Silicon Valley, and Stephen, a physicist at a national laboratory.

“Drake University is not an institution in which knowledge is simply a commodity that is conveyed in the classroom by an educated faculty to a less educated student body. We are an institution that recognizes we have much to learn from our students, from their discovery of things in our work that we have never thought of before ourselves, from the richness of their intelligence, their insights, and the diversity of their experience.” – David Maxwell