Drake has the third oldest Phi Beta Kappa chapter in Iowa, dating to 1923. 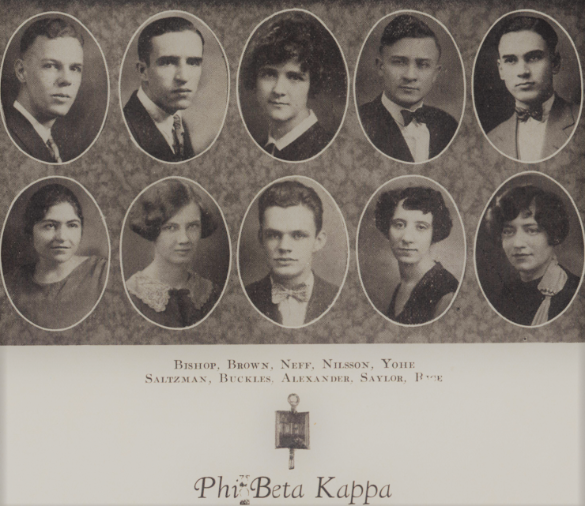 Drake inductees pictured in the 1928 Quax

The foreword to the 1924 Quax proclaims, "This is Drake's illustrious Year! Long hoped for honors have been realized. The highest degree of scholastic success, reached with the granting of a charter of Phi Beta Kappa, has given to Drake University the greatest academic honor obtainable."

In his history of the university, Charles James Ritchey also acknowledges Drake's excitement in its successful, persistent efforts to be awarded a chapter:

“One auspicious event that marked the beginning of President Morehouse’s administration was the long-hoped-for installation of a chapter of Phi Beta Kappa on the Drake campus” (199). The initial application in 1913 was deferred after questions about the application arose at the Triennial Convention. It was again deferred in 1916. Drake won final approval in Sept. 1922. “. . . The granting of a charter was a symbol of the increased confidence and prestige that Drake was gaining in many quarters. In May, 1923, a charter was available for the formal installation of Gamma Chapter of Phi Beta Kappa in Iowa” (201). This made Drake the third institution in Iowa to secure a Phi Beta Kappa chapter, following the University of Iowa and Grinnell College. (From Drake University through Seventy-Five Years, 1881-1956. Des Moines: Drake University, 1956.)