We were the Drakes. A drake is a male duck. We’ve been the Ducklings and Ganders before as well.

John L. Griffith coached every Drake sport, including football. Griffith often brought his two English Bulldogs to practices and games. One of them was named “Griff’s Girlie.” 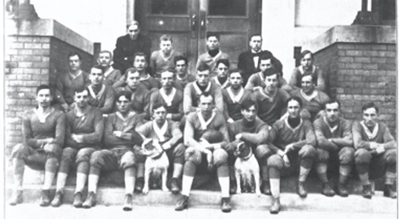 Art Gordon, a sports writer for the Des Moines Register, began referring to the football team as the Bulldogs in the game reports he wrote. The new name stuck and Drake officially became the Bulldogs instead of the Drakes.

Butch I became the live mascot for Drake. He was named by students with only 1 submission by a fraternity.

Dopey Quakpot was a short lived mallard (duck) that served as mascot in 1940. He was the second bird to be Drake’s mascot.

Hedy was a bulldog that was said to have been liberated from a kennel following her owner’s leaving for California.

Porterhouse proved to be uniquely qualified to handle crowds, loud noises, and a rigorous schedule. His parents, the Bells, agreed to continue and Porterhouse served in this role until his sudden death in 2013.

He was known for his incredibly gentle and docile nature, patience, loyalty, and for chasing the basketball across the Knapp Center court to lead the teams out of the locker room for games. He was incredible and set the extremely high standard for all mascots to come. 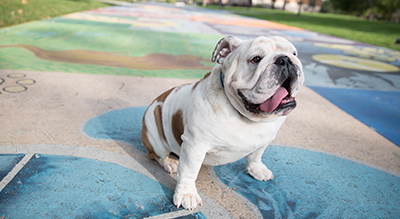 Griff I was introduced as the first-ever official live mascot at a press conference in October 2015. He was chosen for his exceptional temperament and demeanor, as well as his classic bulldog appearance and stature.

Griff I had big paws to fill following Porterhouse, but he proved right away that he was up to it. Griff immediately became a significant part of Drake University and represents the school on every front. He played a key part in recruiting efforts, student life, alumni functions, Drake athletics, and more, during his tenure.

Griff continues to be loved by all in his retirement and his impact on the university and in the Des Moines community was tremendous. 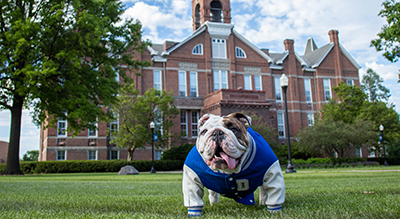 Griff II, was born July 12, 2018 in Minnesota. He was was introduced as Drake University's second official live mascot on July 1, 2020, succeededing Griff I upon his retirement. Griff II is informally known as George. The name "George" is in honor of the first president of Drake Univeristy, George Carpenter. He is the perfect dog for the job and meets the very high standards set by both Porterhouse and Griff I Griff II has an insatiable appetite for human interaction and adores everyone and everything he meets. He is the perfect representative and ambassador for Drake University.