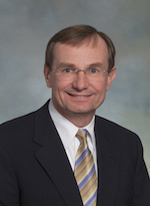 The Lon N. Larson Engaged Practitioner Award was established in 2010 in honor of Lon Larson, PH'72, Ellis and Nelle Levitt Professor of Pharmacy Administration, who passed away in 2009. This annual award recognizes a student who demonstrates the values and actions of Dr. Larson, including demonstrating high ethical standards, reflective practice, innovation, and community service. By recognizing such behavior, this award also serves to motivate other students to become active, engaged citizens in their communities and professions.

Candidates for the Lon Larson Engaged Practitioner Award are full-time Doctor of Pharmacy students in their third year of the professional pharmacy program, enrolled at Drake University. The cash award will be presented to the student at the annual P3 recognition ceremony near the end of the spring semester and is intended to support the financial needs of the student’s final year in the professional program.

Students may apply for the Lon Larson Engaged Practitioner Award by completing an application and submitting an essay on how she or he has personified the definition of an engaged practitioner. A committee comprised of classmates from the class of 1972, students of Dr. Larson’s and his spouse, Dr. Linda Krypel, will review applications, which will be evaluated based on the students’ community service, patient care, service leadership, and other activities above and beyond the pharmacy curriculum.

Dr. Larson was a beloved member of the Drake community. He earned his B.S. in Pharmacy in 1972, and went on to receive an M.S. and Ph.D. from the University of Mississippi in Health Care Administration. He worked in regional health planning and health insurance before beginning his academic career at the University of Arizona. He joined the Drake University faculty in 1991. Dr. Larson has been recognized for his dedication and achievements by receiving Alumni Achievement Awards from both Drake and the University of Mississippi. He also received Drake’s Pharmacy Mentor of the Year award in 2005 and is the only faculty member at Drake to have received the Madelyn M. Levitt Mentor of the Year Award twice, in 1997 and 2007.

Dr. Larson cared passionately about encouraging his students, colleagues, and friends to give back to their community and profession. He defined giving back through three principles that he lived by: working for the good of others, focusing on reflective practice, and becoming an engaged practitioner.

In describing the actions of an engaged practitioner, Dr. Larson said, “Pharmacists as engaged citizens are involved in their profession and in improving the health of their community. They seek to understand the efficacy and nuances of policy. They think carefully and deeply about an issue before forming an opinion and not the other way around. They think beyond slogans and emotionally charged phrases. Instead, they seek information and truly listen. They think critically, and communicate effectively.”

Dr. Larson encouraged young pharmacists to think carefully and deeply about their professional responsibility to their patients and learn from their patients’ experiences. He considered it a pharmacist’s duty to be concerned with the social and economic factors influencing patients getting the most benefit from their therapies and to be cognizant of patients’ access to quality care.

Friends and students of Dr. Larson agree that Dr. Larson was a dedicated mentor, who cared about the lives of his students. He pushed them to become involved and to continually seek out opportunities for growth and development. Dr. Larson is remembered for encouraging his students to further their education (particularly in pharmacy administration and pharmacy social economics). The Lon Larson Engaged Practitioner Award is to be awarded to a student that has gone above and beyond her or his coursework, and given back to their community and profession.