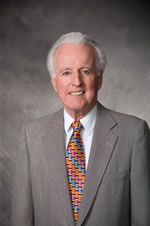 Background: Jack Ellis is a 1957 graduate of Drake University College of Pharmacy. He retired from Abbott Laboratories after a 35-year career in areas of Research & Development and Operations. Beginning as a bench scientist, using internship skills learned in Drake's Pharmacy program, he progressed to the manager of Solid Dose Form Development. Later he transferred to Operations where he became Director of Solid Products Operations.

He has been active in church activities, serving on several boards. He has also served as an officer of a condominium owners association. He enjoys skiing and traveling with his wife Audrey.