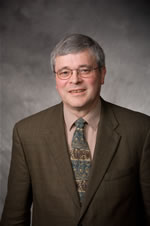 Background: Eugene M. Lutz is co-owner and President of Lutz Pharmacy and Lutz Long Term Care Pharmacy in Altoona, Iowa.  He is past president of the Iowa Pharmacy Association and the American Pharmacists Association-Academy of Pharmacy Practice and Management (APhA-APPM). He is a Fellow of APhA and the American College of Apothecaries (ACA). Lutz served two terms on the APhA Board of Trustees and as President of APhA (2004-2006).

Lutz is currently serving a 3-year term 2008-2010 on the APhA Foundation Board of Directors.  Lutz is also active internationally and was elected a member of the Executive Committee of the Community Pharmacy Section of Federation International Pharmacy (FIP) for 2006 to 2010. Lutz has served on numerous local, state, and national committees and as a member of the APhA House of Delegates since 1980. He is a graduate of the APhA Community Pharmacy Management Program.  His pharmacy was one of 12 pilots in the development of the Iowa Center for Pharmaceutical Care training which is used nationally as a model for pharmaceutical care "re-engineering". Lutz participated in Project IMPACT and several other projects designed to demonstrate the pharmacist's role in medication management. His practice includes long-term care, compounding, lipid, asthma, diabetes management, and immunizations.