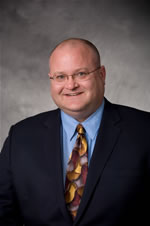 Bob is a graduate of Drake University College of Pharmacy and Health Sciences. Bob served on Drake's National Advisory Board and has been a guest lecturer.

Stessman is a member of IPA, APhA, ASHP, NCPA and Southwest Iowa Pharmacists Association. He has served on the Manning Development Foundation, chair of the Planning and Zoning Commission, Rotary, and Past President of the Chamber of Commerce. Bob is a past participant in the Young Pharmacist Leadership Program. He has served the following IPA committees: Young Pharmacists, Legislative, Professional and Public Affairs and several task force meetings. Stessman held positions as chair of the Academy of Pharmacy Practice, and Speaker of the House of Delegates and the IPA treasurer and is currently President of IPA during the 2009-2010 term.