The week before the CNN Town Hall, I placed my name in the lottery to win one of Drake's tickets to the event. Within the form to submit your name, they asked if there was a question I would like to ask one of the candidates. As it turns out, CNN went through all those questions and picked the students and questions that they thought would fit their event best. Two days later, I received an email asking for more information about myself, and then, on the Saturday before the event, I received a call from the producer of the CNN Town Hall. I had received a ticket! And not a Drake ticket, but one of CNN's tickets! I would be sitting in the main hall of Sheslow, on deck to ask my question if it became relevant. Two days later, I found myself in the third row, with a microphone in my hand, looking Secretary Clinton in the eyes as I asked her about her "newcomer" status to the issue of income inequality. 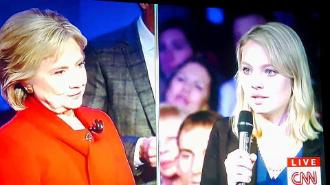 Income inequality is an important issue for me because I believe that many other inequalities are perpetuated, or even in existence, because of income inequality. This question and Clinton's answer was broadcast all over the world, through CNN, CNN International, and the military channel. The next morning, I was asked to appear on CNN's morning show called New Day with Christ Cuomo (the moderator of the Town Hall) and he asked me about my feelings towards Secretary Clinton's answer to my question. Just when I thought my moment of fame was over, Clinton's campaign turned my question into a promotional video! Overall, this has been an amazing experience and I am thankful to Drake University, not only for the many opportunities to meet so many presidential candidates, but for the education I have received that enables me to speak eloquently about and be mindful of the issues of our time.