Famed analyst Charlie Cook said it best: If Iowans don’t meet every presidential candidate at least once, it’s their own fault.

But at Drake, political engagement means so much more than the opportunity to meet the next president.

I always fantasized about being part of the news frenzy. As a kid I really wanted to do broadcast news and be an anchor. That desire had has led me to TV and newspaper reporting. I’m really passionate about telling people the story and being the source for people who want to know.

I chose Drake because it has a fantastic journalism school and great opportunities. I’ve been to the Jefferson-Jackson Dinner, the Growth and Opportunity Party, various candidate rallies, and enough events on campus to get a well-rounded idea of what everyone in Iowa is doing around politics.

Politics indicate the direction we’re heading and, from the perspective of a journalist, this is incredibly important. My dad always talked about politics and I’ve always been exposed to politics in one way or another. He took me to a caucus in 2003 when I was in fourth grade and in 2007 we made a road trip to Iowa and I had my photo taken at an event with Senator Obama—then I saw him become president.

In November 2015 I worked as an intern with CBS and helped them set up for the nationally televised debate of Democratic presidential candidates. I’ve met a lot of executive producers and heard their stories about how they got started in their organizations. Those conversations breathed further life into my hopes of becoming a journalist.

I joined Drake as an art history major and switched my major to political science about halfway into my first year. I was able to get involved right away with the Iowa Caucus Project, a website which at that time was just about to launch. I’ve been a staff writer and blogger, as well as social media coordinator in charge of Twitter, Facebook, Medium, and other platforms.

The Democratic National Committee hosted a presidential candidate debate on Drake’s campus in November 2015, which allowed me to see the political process first-hand and get involved in exciting ways. I was interviewed by CBS News about social media and politics, I did an interview for a new TV show called “Matter of Fact with Fernando Espuelas,” and I participated in a voter focus group conducted by the local CBS affiliate. I’ve met (and got crazy photos with) many of the presidential candidates.

The political season at Drake comes with an enormous number of opportunities to get involved in the political process. I was fortunate to photograph many high profile events on campus, such as the CBS Democratic Debate, a Donald Trump rally, and CNN’s Democratic Town Hall. For the debate and town hall, I was one of very few “pool” photographers. I got to rub shoulders with the likes of Getty Images and the Associated Press as we worked to capture the events unfolding in front of us. Being the youngest pool photographer, I was nervous that I would be pushed around. Those fears were quickly removed when the photographers started to introduce themselves, and went out of their way to make sure that everything when smoothly for me.

The 2016 political season will forever be in the list of amazing opportunities I had at Drake. The atmosphere at Drake not only allows you to make a meaningful impact in your own field of study, but in a completely different field as well. As a first year student who came in as a physics major, I would have thought your were crazy if you told me I would be photographing major events and finish a triple major in physics, mathematics, and computer science in just four year—but this is what is possible when you study at Drake. 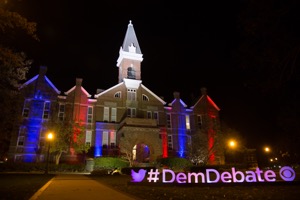 I walked by Old Main day after day for three plus years, but seeing it lit up in red, white, and blue will forever be how I picture that building in my mind. It reminds me not only of the debate week, but the caucus season as a whole. 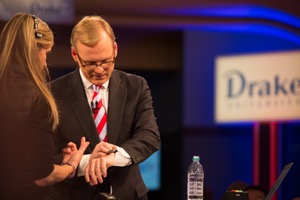 John Dickerson checking his watch just before the Democratic Debate is just one of the many small details I strove to capture. Being able to show what happens behind the scenes is one of the things that make photographing major events memorable. 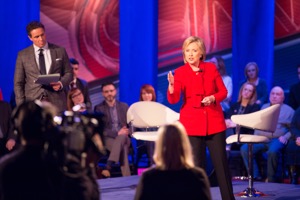 Hillary Clinton answering Drake student Elena Dietz’s question really shows how engaging political events can be. The whole crowd looks to be hanging on every word, and the cameraman gives a behind the sense feel that rounds out the image for me. 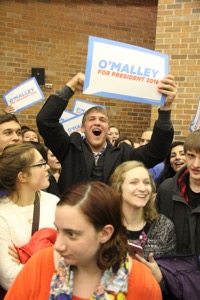 This Martin O’Malley supporter is my favorite photo from the caucus. It really captures how much energy there is at these events. Not being an Iowa native, this was my first caucus, and it felt more like a sporting event than a political event. 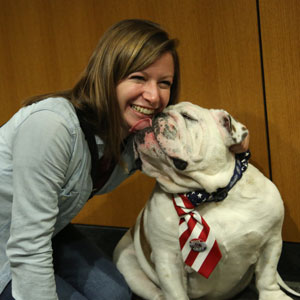 Really, the opportunities were endless.

Hundreds of students scored a seat in the audience for nationally televised debates and town halls. Others worked with a production crew from CBS News or CNN, or spent the day with their favorite anchor from The Daily Show. They had pancakes with the Democratic National Committee chairwoman and even rallied behind the first bulldog to announce his candidacy for canine-in-chief.